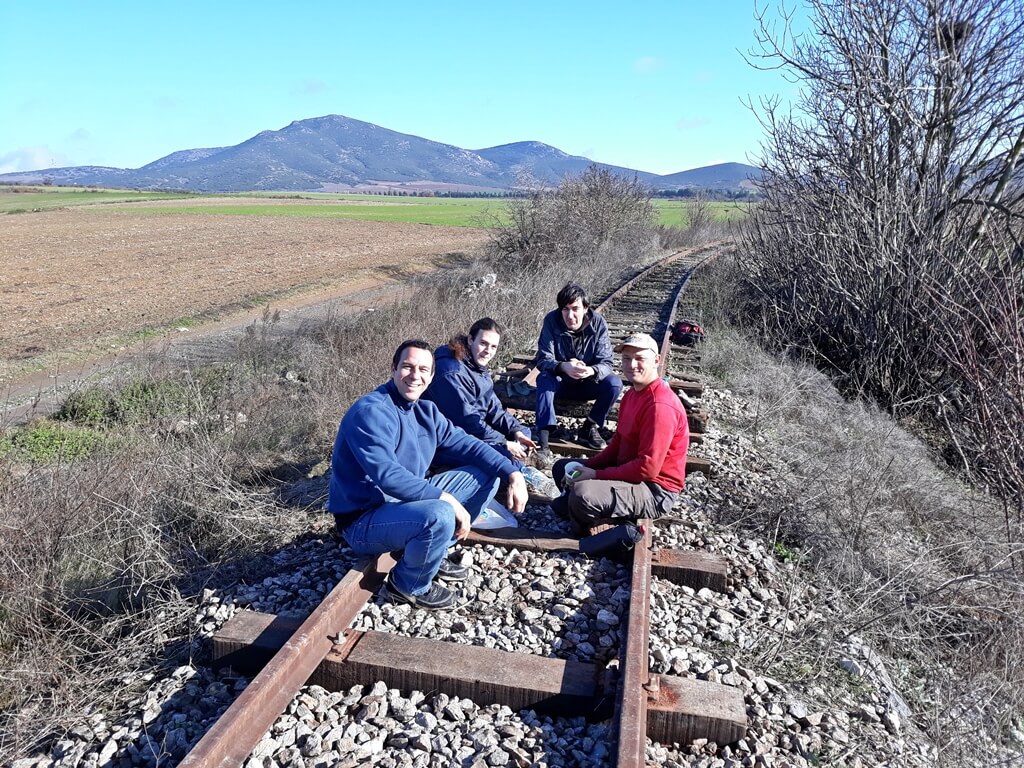 As 2018 ended, let us take a look back, travelling back in time. It was a year full of major milestones and facts for us. From creating our new website, obtaining new rolling stock, expanding our route by working really hard, going further and faster than ever before, to new, critical decisions that were taken recently and shall be announced soon, this was indeed a unique and intense year for Thessaly museum railway. In this article, we shall take a look at our team’s most recent visit to the line. The team arrived at Velestino headquarters on the noon of Friday, December 14th, full of ambition, ready to accomplish all goals had been set previously. On Saturday, we split into two separate teams. The first one was tasked with maintaining our MB 365 draisine. A new gas pump was installed on it, replacing the old, faulty one, along with a new carburettor. These repairs were much needed for our ‘’yellow lady’’ to keep serving us readily.

The team arrived at Velestino headquarters on the noon of Friday, December 14th, full of ambition, ready to accomplish all goals had been set previously. On Saturday, we split into two separate teams. The first one was tasked with maintaining our MB 365 draisine. A new gas pump was installed on it, replacing the old, faulty one, along with a new carburettor. These repairs were much needed for our ‘’yellow lady’’ to keep serving us readily.

At the same time, the second team loaded new sleepers on our Unimog vehicle and took place at km. 10+700, roughly one kilometre before Aerino station. It was there where several sleepers had to be replaced, as they had been damaged by a wildfire, a few years ago. At first, the sleepers were unloaded and distributed across the track. Under the watchful eyes of experienced railway professionals, this very demanding and heavy-duty task was transformed into a unique learning experience for us, offering us the chance to gain technical knowledge and know how. Sadly, we were forced to call it a day, before completing the task fully, as the sun was setting. However, we completed this task the next day. It was then that we tied the sleepers to the track and the ballast was tamped, rendering the track fully safe to operate on at normal speeds, once again. Sunday offered us a good chance to inspect the entire 14 kilometres of our route and so we did. No new faults were found along the line, besides the already existing ones. The day ended with MB 365 having its trial run, from Velestino station to Velestino stop, an absolute success.

Eventually, Monday arrived. This was the last day of action for our team. The entire day was spent on fixing an important issue, concerning the track at km. 3+700. There, foxes struck once again. The track had bent slightly as they chose to dig their nests right underneath it, disturbing the earth, making it dangerous for heavier vehicles (such as our Nippon Sharyo locomotive) to run on it. A rail works train, consisted of Nippon Sharyo loco 3 and Kioleidis platform coach travelled to the site, fully equipped with all tools and personnel necessary to fix this problem. Once again, under the guidance of railway professionals, we were able to enhance and support the embankment and restore the tracks geometry, thus completing an absolutely successful and productive visit to the line.

While all these tasks were being successfully performed by our team, things were taking shape in Volos main depot. Something new was to happen, something we will discuss in detail in one of our next articles – updates. The team had to depart for Athens, yet not everyone left Velestino. Two members of our team had spare time and decided to stay and keep moving forward, literally speaking. Showing unprecedented will and passion, they started cutting trees and grass, restoring the tracks loading gauge in a distance of over four kilometres from Aerino station, extending our line to a full length of 16 operational kilometres! This means we are just 1.5 kilometres from our next stop, Chalkodonio stop. Let the following photos amaze you. At this point, our team would like to extend its best wishes to all of you, wishing you a happy 2019, also promising you that we will keep going, stronger and more persistent than ever. Happy new year!!!