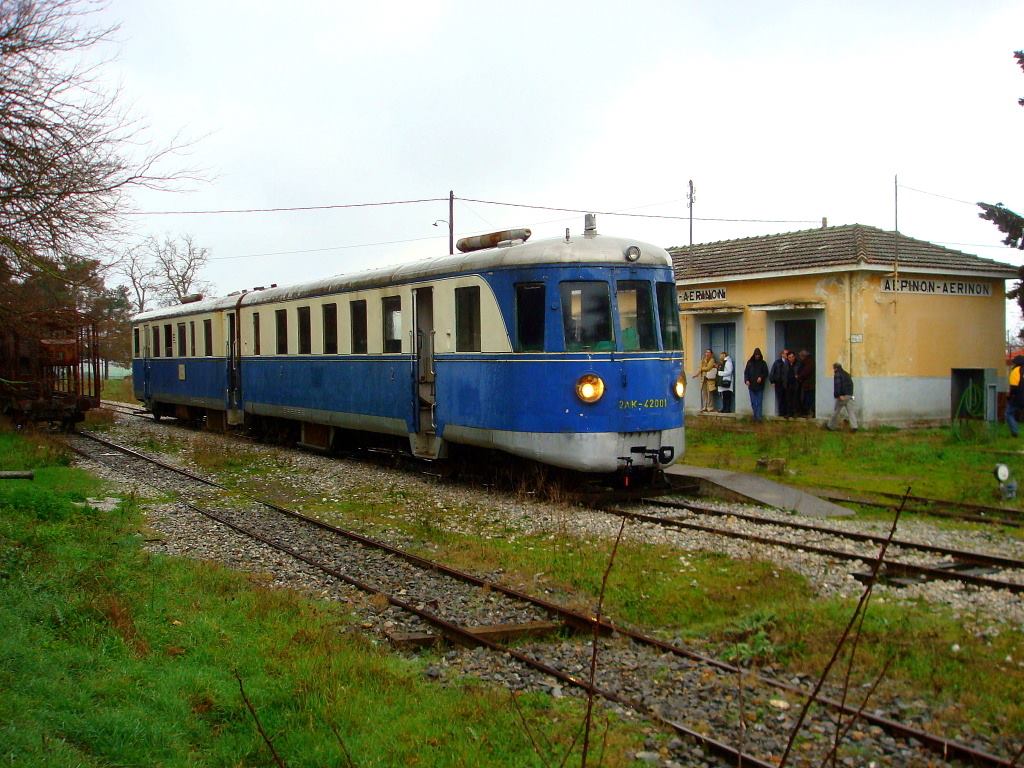 2019 has departed. It was a year full of action and developments for Thessaly Heritage Railway, all leading us closer to our main goals. Apart from these developments it was also the year of new initiatives.

In terms of infrastructure work, a significant amount of time was dedicated in restoring the stretch of track between Aerinon and Chalkodonion stations, which had been inactive for several years. Work was fast initially, however it was slowed down majorly due to faults found on the track and the beginning of fire prevention period, which starts every May in Greece, preventing us from burning bushes blocking the track. Thanks to the aforementioned effort, we now have 800 metres of restored track beyond our previous terminal point, at Aerinon station.

Maintenances work was always ongoing on our route, of course. The Velestino – Aerino part of it saw a lot of loading gauge restoration when and where needed, due to seasonal vegetation, clearing debris gathering on some of our railway crossings and restoring visibility near them, in order to improve safety for us and the locals living near our track. Moreover, a full spraying of the track and loading gauge was performed on the full 14 kilometres long length of the route. Spraying is really important as it saves a lot of trouble and work for us.Local vegetation is a great problem for all railways. We received a great deal of help from railway officials from Volos. We are thankful for their help, as always.

Many of you might remember the theft incident we had some time ago. It occurred on kilometre 6 between Velestino and Aerino. The thieves were caught red handed and we were able to file a lawsuit against them, once again aided by railway staff. They were there, once again, and helped us quickly replace the stolen screws that tie the track to the sleepers.

Another major issue that was restored in 2019 was a dangerous stretch of severely buckled track, at least 10 metres long, located just before Aerino station. In addition to this, certain parts of track where ballast has been disturbed either by weather or animals have been pinpointed and will be fixed shortly.

Finally, it is worth mentioning that the roof of our main depot was rebuilt, replacing the aging old one which was leaking. This is vital as it enables us to better store and safekeep our equipment. More on this will follow, along with photos.

Moving on to our rolling stock now, we were really happy to welcome a new member in our fleet. It is our newly restored dresine, numbered D – 201. Mechanically restored and painted by our members along with railway technicians from Volos depot, the dresine arrived at Velestino depot last December. She is now receiving a few finishing touches and some engine tuning. We shall share photos and a review of her soon. On the other hand we waived goodbye to our beloved, yellow MB Wickham draisine which was transferred to Volos depot for extensive repairs and refurbishing. We will meet her again soon. Track maintenance draisine, numbered D -281 and draisine D – 44, both inactive and parked in our sidings, were also transferred there for safekeeping and future restoration.

During spring, preparations started regarding our gem, the 1937 Linke Hoffman DMU. The train was moved away from the spot where she had been parked at several years ago, on the turntable. This way, not only was the turntable rendered operational again but also the train is now parked on a more suitable spot for its oncoming repair…more on that soon. The turntable was put to good use, as our Nippon Sharyo locomotive was reversed so her wheels do not wear in an unevenly.

2020 has now arrived. Efforts have been made for the team to be present and active at least once a month, sometimes even twice a month, when circumstances allow it. We are moving forward, as always, fuelled by exciting developments that we will share with all of you soon…we are ever thankful to all of you who are interested in our effort. We are always looking forward to more people joining us. Stay tuned…