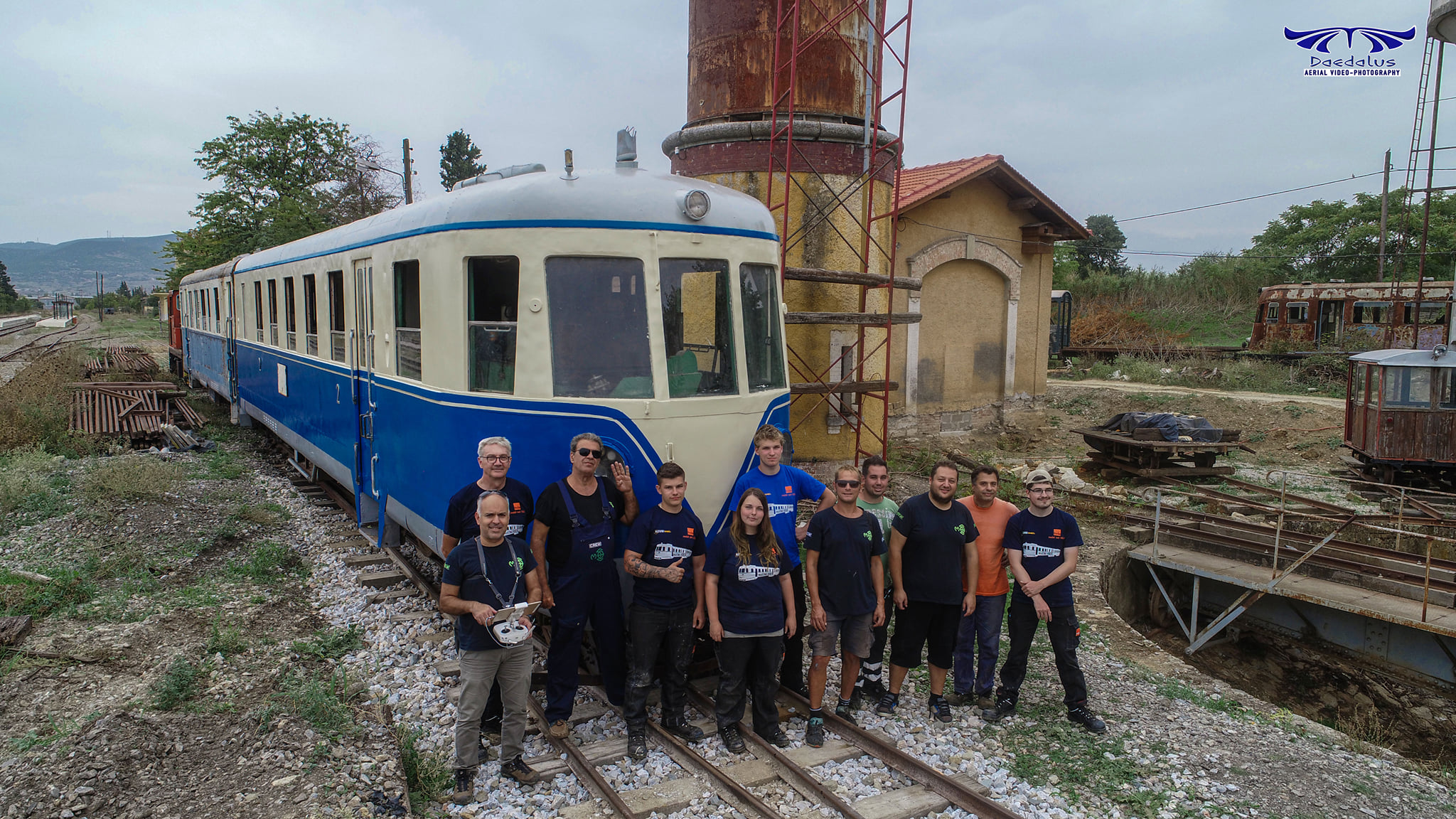 In our previous article we had promised to inform you about major developments taking place. Well, here we are. It is our great honour and pleasure to inform you that the restoration of our Linke Hofmann DMU, our precious gem, is finally underway. She had been in idle since 2013 due to a serious mechanical fault and cable theft that occurred later. Her being inactive for so long caused serious mechanical deterioration, as well as aesthetical deterioration. Her body was majorly worn down. We decided to act fast and thanks to several donations from Greek friends and friends from all across Europe we managed to attract some useful attention to our train…HVLE German train company decided to send over experienced technicians, as part of an Erasmus programme. After an initial assessment, the German team joined our team of volunteers and work began on the ‘’old lady’’, lasting two weeks.

The first aspect of the restoration is in regards with the mechanical equipment of the train. All key components, such as the braking system, cooling and oiling systems, are carefully dismantled, inspected, repaired if necessary, and tested. Stolen electric cables are also gradually being replaced.

The second part involves the car body. Extensive repairs were performed where there was rust. Extensive scrubbing took it away and the old colours were entirely removed to make room for a fresh coat of paint. First, a coat of primer was applied so the train could receive protection from corrosion and the elements but also to be able to receive her new livery. Masking tape was then applied so painting could be performed with accuracy and in order to protect certain sensitive parts of the body, such as the headlights, doors, windscreens and windows.

Before painting could begin, a decision regarding the new livery had to be taken. In unison, our German friends and Thessaly Heritage Railway administrators decided she would be painted in the original livery she bore when she served the Thessaly region, with its original marine blue, crème and silver colours. This was done so the train could fit in the network’s historical context. All staff and volunteers worked in unparalleled professionalism and detail and the second coach of our DMU will be painted in a few months. It is our outmost pleasure and pride that such a unique, important and rare piece of industrial heritage is in our hands and is being reborn in our hands. It is our goal to fully restore her and bring her back to life, a life where she will be the core of our scheduled heritage workings.

There is a catch, however. As this particular train is our flagship, the most important part of our heritage fleet as well as the only surviving train of its kind in the entire world, we are in search of a permanent solution regarding her stabling. As she can not fit in our existing depot, it is absolutely crucial that she can be sheltered and protected, not only from the elements but also from vandals and cable thieves who brought her in her previous state in the first place, back in 2013. For the time being, we are keeping it real and strong, giving our best for her restoration as well as in other projects, currently ongoing, so please…. stay tuned!