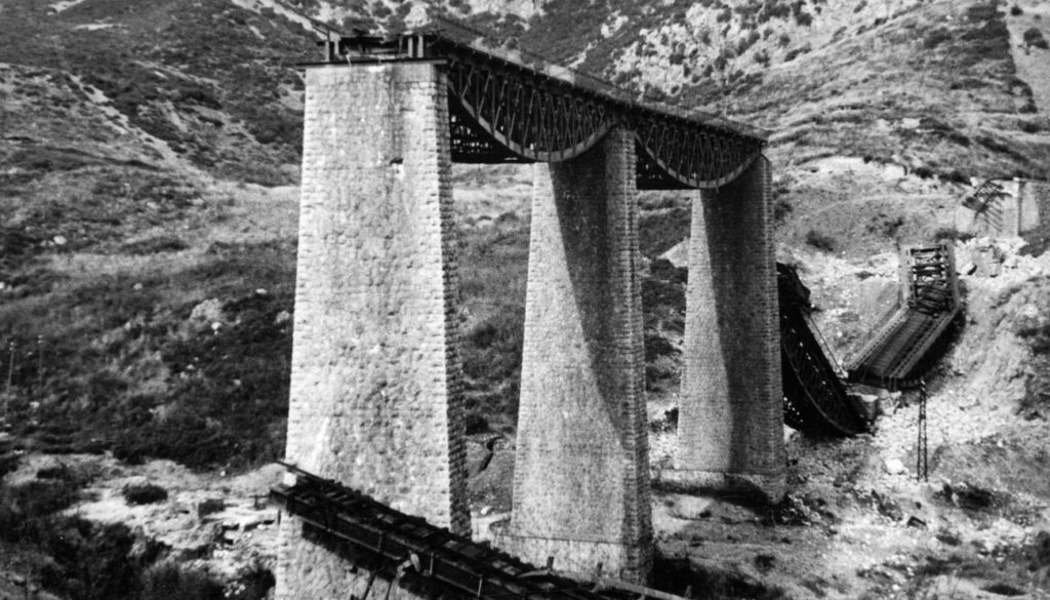 On the 29th of September 1942 a party of twelve commandos led by colonel Eddi Myers and major Chris Woodhouse parachuted at Giona(Γκιώνα). Between these men were a Greek named Themistoklis Marinos and a Cypriot known with the codename “Giannis”. Their objective was to establish contact with Greek resistance forces and materialize “Operation Harling”, that the Allied Command had planned in Cairo.

The plan was to blow up one of the three bridges, Papadias(Παπαδιάς), Asopou(Ασωπού), Gorgopotamou(Γοργοποτάμου), all of which were located at the Mprallos(Μπράλλος) mountain. On top of these bridges lied the main rail line between Thessaloniki and Athens. This was the only reliable link connecting northern Greece to the southern ports, so destroying it, would cause the North African Rommel army to run out of supplies. This operation took place before the El Alamein battle which would determine further military actions in the area.

In the following days, after the commandos parachuted, Myers with captain Hamson surveyed all three possible locations for sabotage and decided that Gorgopotamos bridge was the easiest target. However, for the operation to succeed, they first had to secure the cooperation of the local partisan groups.

On the 19th of November Myers hasted to meet Napoleonta Zerva(Ναπολέοντα Ζέρβα), leader of EDES in Mavrolithari Fokidas(ΜαυρολιθάριΦωκίδας). The next day the leader of ELLAS Aris Velouxiotis(ΆρηςΒελουχιώτης) arrived. All three agreed that the target of the sabotage attack would be Gorgopotamos bridge. Gorgopotamos is a tributary to Sperxios(Σπερχειός) river. Three days after the meeting the area was surveyed by a joined partisan group and on the 22nd of November the plan was finalized. The operation was scheduled for the 25th of November.

Gorgopotamos bridge was being guarded by 100 Italian and 5 German troops. The guards were equipped with heavy and light machine guns, so the neutralization of the guards required lighting speed. It was decided that 150 men would participate in that operation, (86 ELLAS, 52 EDES and 12 commandos). The plan was for the partisans to neutralize or distract the guards and for the commandos to plant explosives at the bridge.

At 11:07 the night of 25th of November the partisan attack against the guards commenced in both ends of the bridge. Everything went according to plan and at 1:30 the morning of 26th of November a part of the bridge was blown up, with a second part following at 2:21 which permanently put the bridge out of use. In the meantime, a train carrying Italian reinforcements was delayed by the partisans and consequently failed to deliver reinforcements to the Italians.

By 4:30 in the morning the last partisan had fled the area and was heading for the Kalyvia(Καλύβια) area which was their meeting point. From the 150 men that took part in “Operation Harling” 4 were wounded. However, the bridge guard lost 20-30 soldiers. As retaliation, a few days later, 9 Greeks were executed there, forced to face the destroyed bridge.

The demolition of Gorgopotamos bridge was one of the biggest acts of sabotage during WWII. It was admired by all occupied Europe and instilled courage into the hearts of the Greek people. However, its implications to the North African campaign were minimal due to the fact the operation was 2 months too late. During this time Rommel’s forces (were) moved west, after a defeat in El Alamein, and did not need to be supplied from Greece anymore.

Years later, on 29th of November 1964 during the anniversary celebrations, a forgotten bomb exploded killing 13 and wounding 45 people. In 1982 the government led by Adreas Papadnreou established the anniversary of the demolition of Gorgopotamos bridge, as a formal celebration of the Greek resistance.